Yoga happened to be my first legitimate review. This is funny to me because I am the most inexperienced yogi I know. I got an email from PINCHme which promoted a 7 day free trial by myyogaworks.com. I was so excited to start my first review that I signed up that Monday night, around 10:00 pm, later realizing that I would have to also start doing yoga that night if I wanted to get the full 7 days trial.

Signing up was easy. They didn’t require a credit card or anything. I’m always suspicious about the companies that ask for a credit card during a free trial. The website is aesthetically pleasing and somewhat calming with the use of greens and grays. I took some time to explore the different yoga sessions they offered. There are 1,093 videos to choose from so far. I found it so cool that they had a link called Journey Series where you specify what your yoga goals are and they provide you with a collection of videos that aid in your journey.

I wanted something that was short and ‘easy’ so that I could do it before bedtime. At 10:15 pm, I finally settled on an 11 minute beginner class called, ‘Your Core is in Your Legs,’ taught by Jennifer Elliot. I pressed play on the video and began to set up my Tone Fitness Yoga Mat

. As I got into position, I was rudely interrupted by my dog, Theta, licking me in the face. I had to kick her out because she wouldn’t let me prosper. I resumed my yoga lesson. To say the least, this was challenging for me. I felt a burn in my arms, legs, and abs, so I knew it was working. I was glad the instructor, Jen, kept telling me when to inhale and exhale. She used some terminology I was very unfamiliar with but it definitely helped that there was also a yoga model doing the moves along with me so I knew what to do.

On day 2 of my trial, I had a little more time to explore the website and there are some really handy features. For example, you can ‘heart’ certain videos and add them to your “Classes I ‘heart'” playlist, or you can create a totally different playlist. I also found it helpful that they have a section called, ‘Just For You,” (a collection of recommendations based on your recent classes) and a section called, ‘New to Yoga? Start Here.’

I thought I’d try something that was a little longer than 11 minutes on this day so… I went for the 16 minute lesson called ‘Quick Beginners Cardio,’ taught by Melanie Lora Meltzer. She had two models following along with her, one male and one female. It seemed that the female model was more advanced so I followed along with the male model who used his knees for the plank position.

This lesson stared out with a lot of breathing. Melanie said this was to get warmed up. I felt more lighted headed than warm. Nevertheless, I enjoyed this lesson. The movements were very easy and repetitive. The most used poses were downward dog, boat, and plank. By the end, I was definitely warm and felt some tension in my abs.

On the third day, I tried myyogaworks.com before bedtime again. This time I tried the ‘Bedtime Yoga,’ a 10 minute class taught by Lakshmi Norwood. I was not expecting this class to be what it was. I sat the whole time taking deep breaths and stretching my spine, shoulders, and neck. There was so much deep breathing, I felt as though I would pass out. Maybe that’s how you’re suppose to feel before you go to bed. There were two blankets and a bolster used as props in this video, but I did not have either of those so I used my throw pillow. I appreciated that the recommended props were listed in the description, however.

On day four, I woke up with some pretty intense back pain; it made it hard to concentrate at work. So when I was searching for a class to try, I wanted something that would alleviate my back pain. That is when I came across a 22 minute beginner class called, ‘Low Back Sequence,’ taught by Olivia Barry.

Olivia did not hesitate one bit with getting started with this class. With the previous classes, the teachers would do a little introduction and talk about what the goal of the class is for about 30 seconds. Not Olivia. We started laying on our backs, doing some deep breathing exercises.

For me, the most difficult part of this class was not the back exercises, but holding downward dog and planking. My shoulders and biceps were so weak, I couldn’t hold it. This seems like it’s something I need to work on more if I’m going to continue doing yoga.

To wind down, we ended with more deep breathing exercises. This time, I lay on my back and closed my eyes while I listened to Olivia give direction. This part went on for longer than expected in silence. Multiple times, I peeked out of the corner of my eyes to see whether my computer had unexpectedly shut down or if the video was buffering but no, Olivia was just taking her time.

Although my back pain was not fully gone after this class, I did learn a few stretches that could help me in the future.

I was feeling pretty bold on day five, so I decided to try a level 2 (intermediate) class. The class that most interested me was a 22 minute class called, ‘Standing Poses for the Glutes,’ taught by Michelle McKay (she is one of six black teachers featured on the site out of fifty-six teachers total).

Before watching this video, I noticed one of the comments said, “…if you aren’t sure if you are a level 1 or a level 2, this was a great class to help determine that.” I’d say that I may be level 1.5. Although this class did not leave me feeling tired or sweaty, I found myself taking advantage of some of the adjustments that Michelle allowed. For example, instead of holding downward dog (the bane of my yogi existence), I was allowed to use child’s pose. Had it not been for such adjustments, I probably would have struggled to keep up or even finish the lesson.

Another difference that I noticed between a level one and level two class is that it moved a little faster. Michelle did not give much time to hold poses and the transitions were much more ‘flow-y.’ All in all, provided that I can get over the struggle of holding downward dog, I will continue taking level 2 courses.

Since day 6 was a Saturday, I took this opportunity to take a class geared more toward morning yoga, so I found one called ‘Flow Joe AM Pick Me Up,’ taught by David Kim. Its a 24 minute intermediate class. Let me tell you, if you are a night bather, skip this class or do it in the afternoon because I was definitely sweating.

Even though it messed up my shower routine, this was my favorite class so far! The pacing was just right, it didn’t move too fast or too slow. I loved the direction that David gave, I didn’t have to question what pose or movement I was supposed to be doing while I was not looking at the screen; I barely looked at the two models he had available. Because the class moved at such a great pace, I didn’t have to hold downward dog until my arms gave out!

By the end of the class, I knew this would be one that I added to my favorites.

On the last day of my myyogaworks.com trial, I decided to try one of the non-traditional classes that they offer. Some of those include cardio, meditation, and yoga with your dog. Since my dog, Theta, was constantly in my face over the last week while I was trying to practice yoga, I asked her if she wanted to join me today. She said yes.

There were only three classes suitable for a dog her size but a few more were offered featuring a small breed dog. The classes were so short, I ended up doing two. The first was a 4 minute class called ‘Ustrasana and Half Moon with Your Pup’ and the second was a 5 minute class called ‘Standing Poses with Your Pup.’ They were both taught by Mia Togo and her dog, Willa-bean Buttercup.

The class did not engage the dog as much as I would have liked but I did get a great stretch out of it. According to Mia, the point of the class is to use your dog for support (physical and emotional), accept imperfections, and have a moment of appreciation.

All in all, I really enjoyed myyogaworks.com and I’d recommend it to anyone who wants to get fit or who enjoys yoga but doesn’t always have the time to go to a physical class. If I were to continue with this service, I would definitely take advantage of the journeys they offer, especially the Office Yoga journey, the Core journey, and the Happy New You journey.

For $15/month you can start your yoga journey. If you have had a chance to take advantage of myyogaworks.com, I’d love to hear from you in the comments section. Also, get yourself a special, affordable yoga mat here 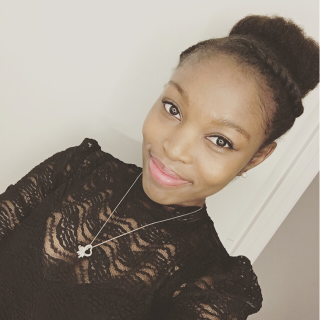 Hey, My friends call me Meisha! My passions are cooking, animals, and just being me. Follow my journey through this thing called 'adulting.'

The mission is skincare, and the road is a little bumpy.

The world at your fingertips